Becoming a Man in Chicago, which uses the principles of cognitive behavioral therapy, has cut arrests of young men for violent crime in half and significantly increased graduation rates.

By Nissa Rhee NOVEMBER 5, 2016 CHICAGO—In a large classroom on Chicago’s South Side, six teenagers in the Becoming a Man program sit in a tight circle with their counselor and talk about their summers. DJ, a tall boy with glasses, tells the group that he gave his girlfriend a promise ring. The boys laugh, teasing him and congratulating him in equal measure.

But when everyone settles down, DJ becomes serious. He says he’s been moving around a lot. He’s been trying to get bond money for his dad, who’s in jail. And he got into an argument with a boy from a rival high school after the boy threatened him and trashed the swimming pool where DJ worked as a lifeguard.

“I got to the level where I wanted to fight with him,” DJ, who asked that his last name not be used. “I told him to meet me after work.”

But DJ ultimately decided not to fight, choosing to work at a pool in another neighborhood instead. His counselor, Michael Anderson, was pleased: Small disagreements can quickly escalate into life or death fights for youth in Chicago.

The city has had more than 620 homicides so far this year, making 2016 the deadliest year in more than two decades. Gang violence and the heroin epidemic play a role. Police also say that the spike in violence is partly due to tensions between officers and communities of color following the release of several police shooting videos, including that of black teenager Laquan McDonald in 2015.

The school-based mentoring program meeting here today is trying to address these problems by helping young men like DJ stop and think before they respond with violence. And they are having some impressive success.

A study by the University of Chicago Crime Lab found that Youth Guidance’s BAM effort – which involves 3,000 young men in grades 7 through 12 in 51 schools – decreased violent crime arrests by 50 percent and increased high school graduation rates by 19 percent. The researchers estimated that based on the costs of crime alone, society gained up to $30 for every $1 invested in BAM.

Run by the nonprofit Youth Guidance, BAM has also garnered the support of President Obama, who sat in on a BAM circle in Chicago in 2013. The president’s My Brother’s Keeper initiative – a mentoring plan aimed at helping young men of color reach their full potential – was partially inspired by that visit. According to the White House, nearly 250 communities across the nation have established mentoring programs since My Brother’s Keeper was launched in 2014. Mentoring programs have been shown to increase an at-risk youth’s school attendance rate and reduce the likelihood that they will use illegal drugs or drink.

The key to BAM’s success, researchers say, is its use of the principles of cognitive behavioral therapy to help young men examine their instantaneous responses to everyday situations.

“Some 70 percent of homicides stem from an altercation that escalates. They’re murders that sort of happens in the moment,” explains Anuj Shah, an associate professor of behavioral science at the University of Chicago Booth School of Busines, who co-authored the study. “BAM is about getting young men to think about their thinking, to slow down and notice their thought patterns or the automatic ways that they respond to a situation.”

Professor Shah says that people often think that events around them make them act a certain way. One of the goals of cognitive behavioral therapy, however, is to help people see that there are multiple ways of interpreting events, and to slow down their responses to them.

While BAM is not a therapy, it uses CBT’s principles of “slow thinking” in its curriculum and meeting structure. BAM participants gather for an hour once a week in a small group, called a circle, with their counselor. Every session begins with a check-in where the counselor asks about their week or how they’re doing physically, intellectually, emotionally, and spiritually. The counselor will also check how the boys did with the homework assignment from the previous week.

Then the group works through exercises in the BAM manual. The curriculum is organized around six core values: integrity, accountability, self-determination, positive anger expression, visionary goal-setting, and respect for women. While studying a particular value, they might watch an inspiring video or do an exercise. Before teaching, every BAM counselor goes through the lessons themselves with a group of other counselors, so they can better understand what challenges each exercise poses.

For the anger expression unit, for example, counselors bring in boxing gloves and have the students hit focus mitts. It’s a way for the students to learn how to express anger in a healthy way, says counselor Michael Anderson.

“I challenge [the students] to find their own way of expressing anger, whether it’s listening to music, playing sports, lifting weights, or yelling in a pillow,” says Mr. Anderson. “If you have to get anger out, get it out. But find a way to get it out that doesn’t hurt yourself and doesn’t affect others.”

Every BAM session ends with a check-out time, where the young men can say how they’ve changed in the past hour. If the students want to talk more, they can visit their BAM counselor for a drop-in session or schedule an hour-long private counseling session. Since BAM counselors have offices at the schools where BAM operates, they are available to students throughout the school day.

Anderson says that the conversations he has with the students are one of the most important aspects of his work. The students can vent their feelings and talk about the challenges they are facing at home or at school. Anderson can then help them pick apart the decisions they’ve made so far to address those challenges and make suggestions on how they might set goals for the future.

Anderson says that he wishes he had that kind of a safe place to talk when he was growing up.

“I pretty much had the same group of friends my whole life and we never had a conversation like these guys have, because of the stigma,” says Anderson. “Especially as a black man, you don’t talk about stuff like that. That’s soft. That’s emotional. That’s what girls talk about. But, no, it’s needed. It’s very needed. Because it’s going to come out eventually and usually from my experience it doesn’t always come out in the best way.” 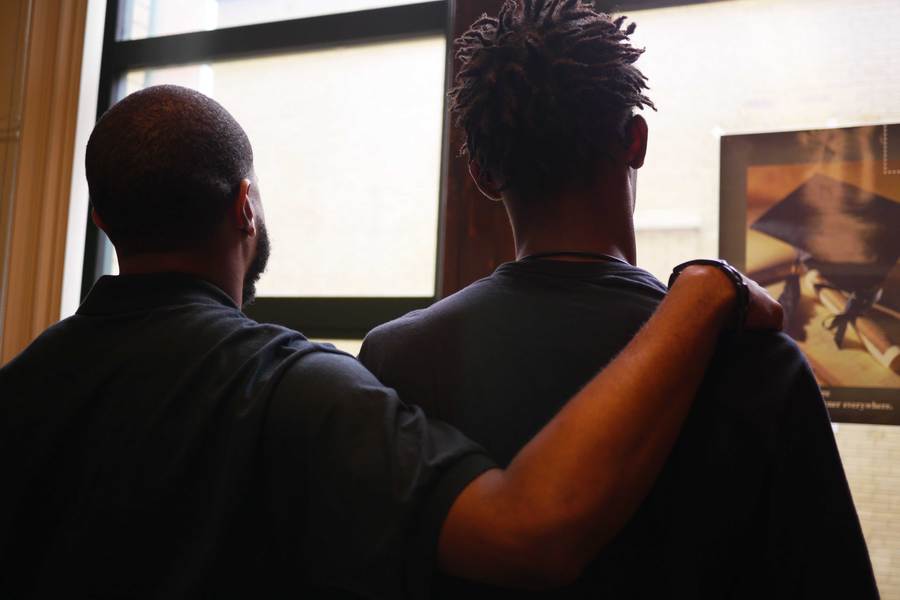 Kobe, a 16-year-old, knows this well. He says he joined BAM to better his life. He was having trouble with his step-dad and getting angry a lot. Before meeting Anderson, he didn’t have anyone he could go to for advice.

“[BAM] has helped me express my anger some,” says Kobe. “I can go to my counselor and talk to him and explain how I felt and tell him what’s going on. And he’ll give me positive feedback and recommendations.”

Kobe visits Anderson nearly every day now. He says that with the help of his counselor, he’s learned to cope with some of his family problems. He no longer lives with his step-dad and is devoting more time to playing guitar. Thanks to BAM, he also left Illinois for the first time recently, to go on a college tour.

The University of Chicago Crime Lab is working on a set of core design principles for mentoring programs that want to incorporate cognitive behavioral therapy in their work. Researcher Shah says that as more mentorships start teaching at-risk young people how to “think slow,” society can hope to see less violence among youth.

“The truth is, everybody acts automatically from time to time,” says Shah. “It’s just that people growing up in violent neighborhoods pay a higher cost if they don’t pause and reflect.”