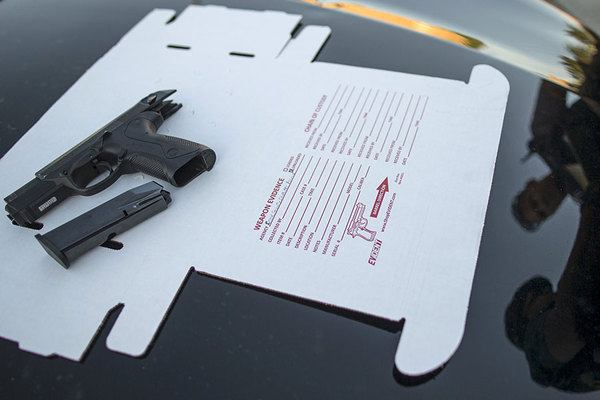 Chicago is one of several cities seeing a spike in violent crime. But local factors, not national trends, seem to be driving the increase.

CHICAGO — For the last three months, Chicago artist Garland Martin Taylor has been driving around the country with a 380-pound stainless steel gun sculpture in the back of his pickup truck. Called “Conversation Piece,” the sculpture is engraved with the names of children who have been killed by gun violence in the neighborhoods surrounding his South Side home.

“There needs to be a monument to this, because it’s like an epidemic,” he said this weekend in an interview at his Chicago studio. “The gun is like any other war memorial.”

In many ways, it is a memorial to Chicago’s recent crime spike. Last month, Chicago saw its deadliest September in 13 years. The murder rate is up 21 percent from last year.

The rise in violent crime has been mirrored in several major cities across the United States, such as Milwaukee, Baltimore, Houston, New Orleans, St. Louis, and Atlanta. Some of the possible influences could be similar, such as tensions between police and minority communities or the supposed “Ferguson effect” of police patrolling streets less aggressively for fear of being a part of the next scandal.

But perhaps Chicago’s bigger lesson is that, at this point, local factors appear to be more relevant than any national trend.

“I think what we’re seeing now really is a lot of different things happening in different cities,” says Roseanna Ander, executive director of the University of Chicago Crime Lab. “There really isn’t, as far as I can tell, any one thing that is happening across the nation to explain the increases or decreases in violent crime.”

Those who study crime trends caution against drawing broad conclusions from these recent swells in crime; year-to-year fluctuations in crime rates are common and several cities have seen a decrease in violent crime this year. But those faced with the sudden onslaught of violence are under pressure to find the spike’s origin.

In Chicago, these factors include the splintering of gangs after the jailing of major gang leaders and the destruction of low-income housing projects. Lingering racial segregation and poor access to jobs and services after the recession have exacerbated the problem.

But Mr. Taylor’s conversation piece is indeed at the center of the conversation. Chicago’s biggest problem, many say, is guns.

The most important difference between violent crimes here and in other cities such as New York and Los Angeles is the number of guns, says Ms. Ander.

“The Chicago Police Department takes between eight and nine guns per capita for every one gun that the NYPD takes off the street, and between two and three guns for every one gun that the LAPD takes off the street,” she explains. “Our crime is more likely to involve guns and so it is more likely to have a very serious outcome: shootings or homicides.”

Police Superintendent Garry McCarthy worked as a police officer in New York City for 25 years before coming to Chicago, and he has frequently blamed the high crime rates in Chicago on the city’s relaxed gun laws and lenient sentencing for illegal gun possession.

“You know, everybody asks me what’s different about New York and Chicago. I can tell you very simply: proliferation of firearms,” he said last year in a press conference after a Fourth of July holiday weekend in which 82 people were shot in an 84-hour window. “There’s too many guns coming in and too little punishment going out.”

Not everyone agrees. Last week, members of the Chicago City Council Black Caucus called for the removal of Superintendent McCarthy in the wake of rising crime rates. The aldermen criticized the city’s top cop for not increasing African-American police recruits and failing to place blacks in leadership positions in the department.

“My constituents get sick and tired of hearing about statistics and no action,” 34th Ward Alderman Carrie Austin said in a news conference on Monday.

Increased tension between the police and communities could be contributing to a Ferguson effect, adds Alfred Blumstein, a criminologist at Carnegie Mellon University in Pittsburgh.

“To the extent that [the police] are backing off, that suggests that there will be more likelihood to see people in the community who are violent moving forward and doing criminal things,” says Professor Blumstein.

Some politicians and law enforcement officers supported that theory on Wednesday during a closed-door meeting held by US Attorney General Loretta Lynch as part of the Justice Department Summit on Violent Crime Reduction. At the event Chicago Mayor Rahm Emanuel said, according to the Washington Post: “We have allowed our police department to get fetal, and it is having a direct consequence. They have pulled back from the ability to interdict … they don’t want to be a news story themselves, they don’t want their career ended early, and it’s having an impact.”

But Blumstein warns that it is too early to say with confidence how large an impact the push for police accountability has had on crime levels this year and that “inevitably, crime is local.”

How Chicago has changed

Chicago once had some of the toughest gun laws in the nation. Handguns were effectively banned, and gun shops were prohibited within city limits. Concealed carry guns were also banned statewide in Illinois.

In recent years, however, the courts have chipped away at these laws in their rulings. In 2010, the US Supreme Court ruled Chicago’s handgun ban to be unconstitutional. Then in 2012, a federal appeals court struck down Illinois’ concealed carry law, the last state ban on concealed carry in the country. In a final blow, a federal judge ruled last year that Chicago’s prohibition on gun stores was unconstitutional.

McCarthy says the issue is less about the laws that have been rolled back than the laws still on the books. Those who are convicted of illegally having guns are sentenced too lightly, he argues. Last week, he said in an interview with ABC News that there have been at least 150 shootings or murders so far in 2015 that “would not have occurred if we had stricter penalties for gun possession.”

An analysis done by the Chicago Sun-Times last November found that most people convicted of illegal gun possession in the city are getting Illinois’ minimum sentence of one year and not the maximum sentence of three years.

In 2013, Mayor Emanuel supported proposed state legislation that would have increased minimum penalties for first time gun offenders to three years, a number more in line with New York’s 3-1/2 year minimum. But that bill died in the Illinois House of Representatives after some lawmakers argued that it would merely increase incarceration numbers without helping rehabilitate offenders.

Crime Lab’s Ander says that while Chicago has very specific and local challenges with gun violence, guns are driving violent crime across the country so nationwide solutions are needed.

“It’s one of the most pressing policy challenges, because there are lots and lots of neighborhoods, not just in Chicago but around the country, where people are living with incredibly high rates of shootings and gun violence,” she said. “And that has a huge impact on the people growing up in those neighborhoods and on the cities themselves.”

For his part, sculptor Taylor says he was floored by the number of people he met on a 5,500-mile tour of the US this summer whose lives had been touched by gun violence.