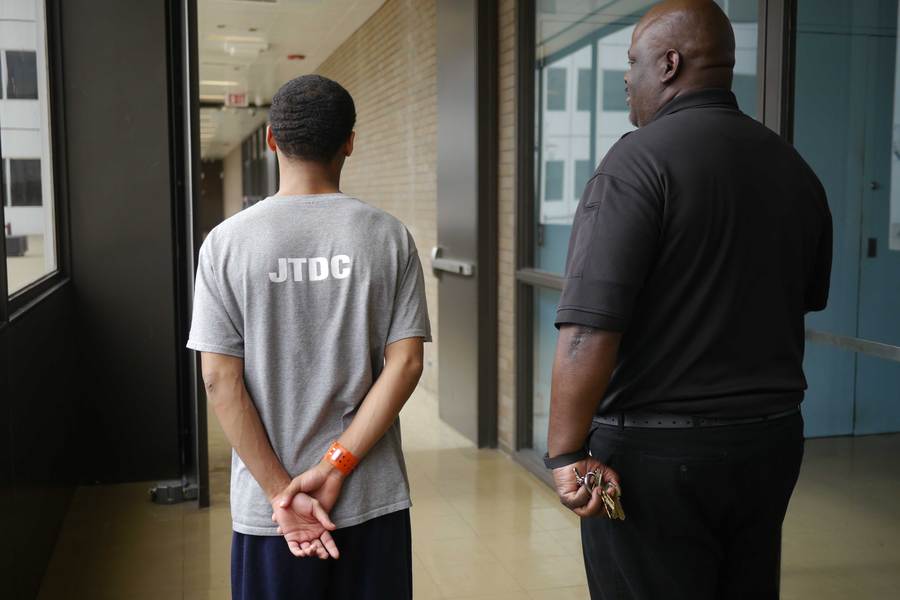 More than 100 years ago, Illinois became the first state to create a separate court for juveniles. Now, as the state rethinks juveinle justice, its biggest county is pioneering a program that reduces readmission rates by 21 percent. Part 2 of 3.
*
By Nissa Rhee
*

DECEMBER 23, 2016 CHICAGO—Before being sent to the Cook County Juvenile Temporary Detention Center in May, 17-year-old Nigel frequently got into fights. In the past five months while he’s been awaiting adjudication, he’s had to learn new strategies for coping with people.

“But here you can go to your room and come out and you’re going to have to think about it, because the same person is going to be right there,” says Nigel, whose case is still pending and whose lawyers allowed the Monitor to speak with him on condition that his last name not be used.

This isn’t Nigel’s first trip to the JTDC. He says that each time he’s worked with the center’s staff to learn how to better manage his anger. When he gets into confrontations now, he goes to his room until he can calmly talk through the argument. It’s a strategy that is working well for him, he says.

“You’ve chilled off in your room, so now you have time to think about what you could have done and what you can do when you come out of your room to fix it,” he explains.

Nigel is one of thousands of young people who stay at the nation’s largest juvenile detention center each year waiting for trial or sentencing. Through an innovative discipline program, they are learning how to slow down their reaction time and think through problems. Rooted in cognitive behavior therapy, the program has had some impressive results.

A National Bureau of Economic Research study released this summer found that the JTDC’s program reduced readmission rates by 21 percent. University of Chicago researcher Anuj Shah says that the results confirm how quick reactions to arguments “on the street” can lead to crimes and prison time.

“These kids are not bad kids,” says Mr. Shah, a coauthor of the study. “If most of them could just get 10 minutes back to think about things differently, many of them wouldn’t be in the JTDC. So what most of these interventions do is give them that time back to pause and reflect.”

Cognitive behavior therapy is a technique that is making its way into more and more programs serving at-risk youth in Chicago and elsewhere. CBT attempts to slow down automatic reactions young people have by analyzing the feelings that provoked the reaction, such as anger, and encouraging young people to think about different ways they could have acted. The technique has become popular because of its success at reducing violence. A mentoring program here that uses the technique successfully decreased violent crime arrests by 50 percent and increased school high school graduation rates by 19 percent.

The technique also has a relatively low cost: Shah and his colleagues estimated that the “think slow” program at JTDC costs just $60 per juvenile detention spell. (Inmates stay an average of 21 days at the center and leave when their cases have been either dismissed or they have been sentenced.) Researchers say that the program ultimately saves the county government thousands of dollars in prison and court fees and empowers young people to solve problems nonviolently. Cook County spends more than $500 per detainee each day they are at the center.

The progress is no small feat in a city that has lost more than 700 people to gun violence so far this year, including more than 65 juveniles. Meanwhile, the number of juveniles arrested for crimes in Chicago has steadily declined over the past 10 years. In the first 11 months of this year, 10,236 people under age 18 were arrested in Chicago, less than one-third the number arrested for crimes in 2006.

The JTDC launched its cognitive behavior therapy program in May 2007 and is one of the only juvenile detention centers in the country to use the model. Justice officials from both Tennessee and Washington have expressed interest in copying the Chicago model.

The behavioral program is rooted in the center’s discipline program, a four-tier system where inmates are moved up or down a level depending on their behavior. If the young people incorporate “slow thinking” into their everyday interactions, the staff reward them by moving them up a level – which comes with privileges like a later bedtime, more phone calls, and extra sports and activities.

How could you have done it differently?

But Deputy Superintendent Diane McGee says that the CBT approach really permeates all programming at the JTDC to the point where it’s a “way of life.”

“The uniqueness of the CBT system here is that all disciplines are all doing the same thing,” explains Ms. McGee.

Staff from psychologists to case workers to officers are trained in CBT and all follow the same model of asking inmates, “What was your behavior? What was the antecedent behavior? Yeah, you did this, but how could you have done that different and what are the steps that you can take to ensure that you’re not making the same error,” says McGee.

Team Leader Jackie Ferroli, who is in charge of one of the living units at JTDC, says that she uses CBT on a daily basis and recently mediated a disagreement between two members of a rival gang. She walked the boys through a series of questions and tried to point out some of the “thinking errors” that they were making.

“That kid is in an opposing gang, but what specifically did he do to you?” she asked them. “Do you know him? Have you seen him on the street?”

Ms. Ferroli says that the questions are meant to show the kids their thinking process, but also let them experiment with a new way of resolving issues in a safe environment. “They’re a lot safer here than they are on the outside,” she says, where they have to deal with the realities of gun violence and gang lines.

But both staff and the inmates themselves here know that the JTDC is only a temporary stopping point, a place to learn, perhaps, but ultimately still a prison.

Seventeen-year-old inmate Jarell knows this and has his eyes set on the future.

“As I get older, my consequences get greater,” he says. “So it’s like either keep doing what you’re doing and keep going down that road and get locked up, or make a change. So right now, I’m at the point where I just want to change for the better.”

Jarell says that the center’s CBT program has taught him “how to be calm and don’t explode as much” when he’s angry, and he hopes to use those skills in the future as a successful businessman. In the meantime, he’s hoping that the progress he’s made in the program will look good on his court report when he eventually goes before a judge.

“I’m changing my lifestyle, my environment, and the people I associate with,” he says. “I had a lot of people who say, ‘I can’t do this, I can’t do that.’ But if you set your mind to it and do what you’ve got to do, great things will come your way.”