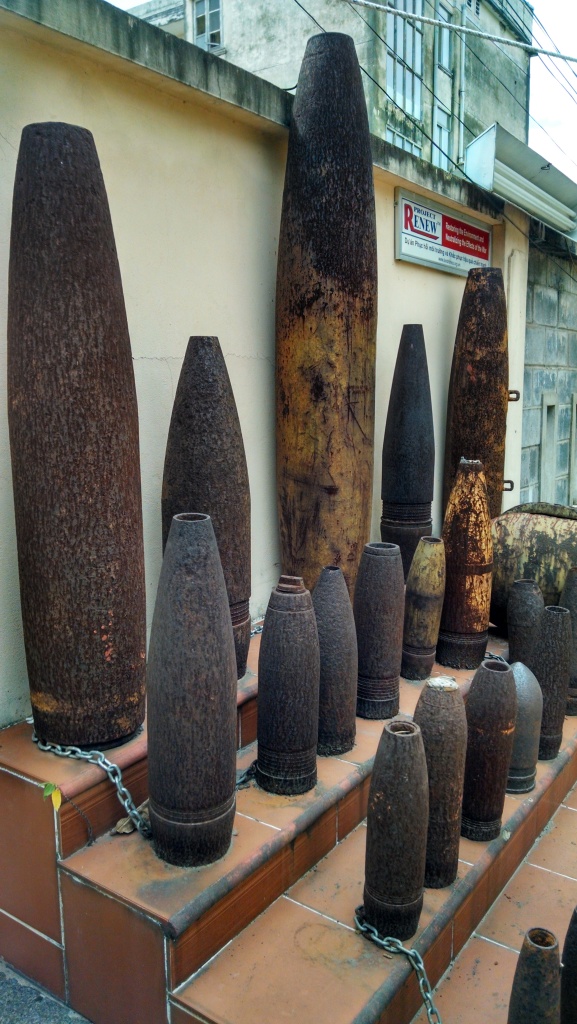 An exhibit of unexploded ordnance in the parking lot of Huu Nghi Hotel, where I stayed in Dong Ha. (Photo by Nissa Rhee, June 2014)

After visiting the former demilitarized zone in Vietnam in June, I spent some time with the staff of Project RENEW in Quang Tri Province. RENEW — which stands for Restoring the Environment and Neutralizing the Effects of the War — was co-founded by US Army veteran Chuck Searcy and works today on the issue of unexploded bombs in the region just south of the DMZ.

Due to heavy fighting in the area during the war, Quang Tri is the province most affected by unexploded ordnance (UXO) in Vietnam today. Project RENEW believes that 60 to 65% of the province’s land is contaminated with UXO. These bombs, which failed to explode when they were first dropped in the ’60s and ’70s, have become de facto land mines and can be incredibly dangerous when discovered.

The US military estimates that 10 percent of the bombs they dropped during the war failed to detonate. Considering that the US dropped more bombs on Vietnam than what was dropped on Japan and Germany combined during WWII — the explosive equivalent of 450 Hiroshima-size atom bombs — this is no small number.

A discarded UXO is used as a flower pot in the garden outside of Project RENEW’s office. (Photo by Nissa Rhee, June 2014).

With support from Norwegian People’s Aid, Project RENEW is working to make Quang Tri Province safe by educating the public about the dangers of UXO and systematically finding and destroying ordnance.

To understand more about their work in Quang Tri, I met Nguyen Thanh Phu at the organization’s Mine Action Visitor’s Center in Dong Ha. RENEW opened the center in August 2011 and offers school groups, tourists and visiting dignitaries educational tours on UXO. 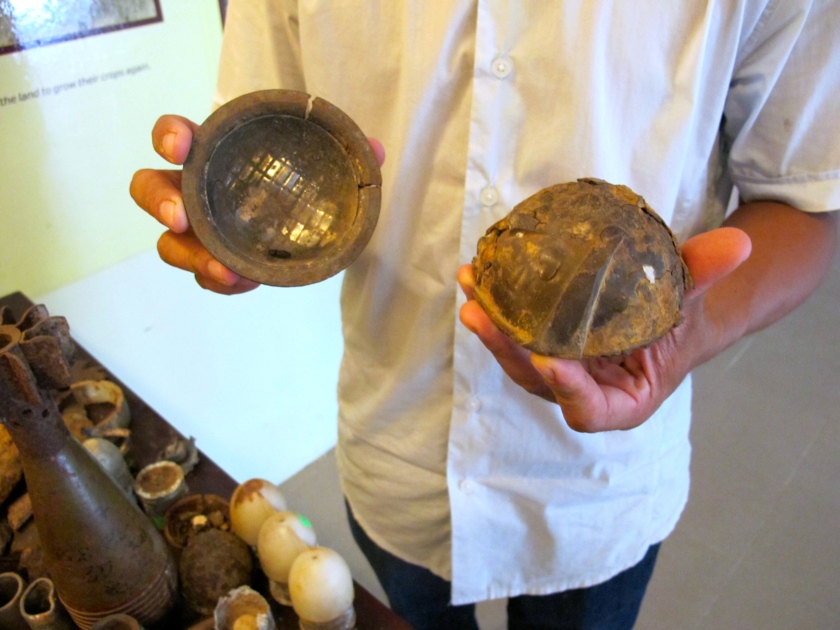 The center showcases a wide variety of unexploded bombs, including the dangerous bomblets that are packed into cluster munitions. Phu told me that cluster munitions and M79 40 mm rifle grenades cause 45% of the injuries and deaths in Quang Tri today. Both the bomblets and grenades are small and can look like toys to any children who find them.

A child’s drawing shows the discovery of UXO in a field. Students who come to Project RENEW’s Visitor’s Center are asked to draw something that they learned on their field trip. (Photo by Nissa Rhee, June 2014)

The Vietnamese students who visit the center learn how to identify unexploded ordnance and what to do if they find any wartime bombs. The education program seems to be working: RENEW runs a hotline for reporting discoveries of UXO and has seen calls substantially increase in recent years.

A diorama at the Project RENEW Visitor’s Center shows how UXO is cleared near people’s homes. (Photo by Nissa Rhee, June 2014)

Visitors to the center also learn about RENEW’s bomb disposal work, which is led by their explosive ordnance disposal (EOD) teams. When a piece of UXO is discovered, one of the teams is dispatched to the area to assess whether the ordnance can be safely removed. If they decide it is too dangerous to touch, the team will destroy the ordnance on site, as depicted in the diorama above. If it appears relatively stable, however, the team will move the ordnance to their central demolition site where it will be destroyed at a later date. 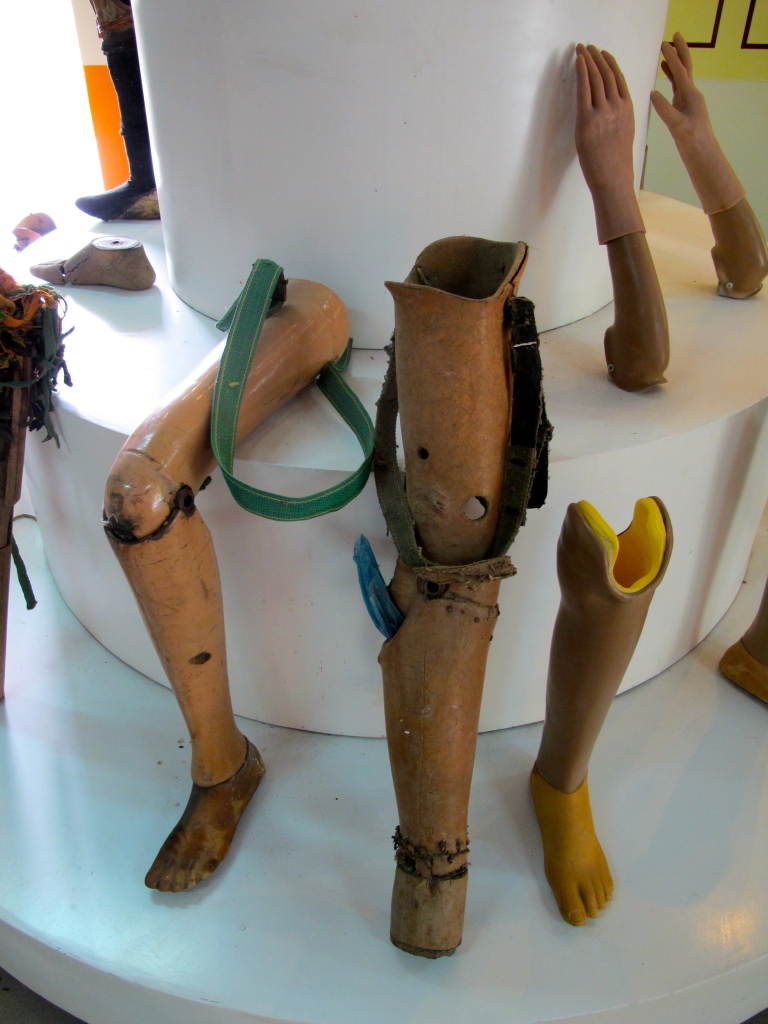 Since it was founded in 2001, RENEW has also worked with the survivors of bomb explosions to regain their mobility and financial independence. RENEW provides survivors with 2,000 to 3,000 prostheses each year. The organization also started a mushroom farming program that gives survivors the equipment and skills necessary to grow mushrooms at their homes. The mushrooms are later sold at market.

After visiting the Mine Action center, I went with Phu to RENEW’s central demolition site to see the work of an EOD team first hand. Last year, RENEW’s EOD teams safely removed and destroyed 2,882 UXO in Quang Tri and cleared ordnance from 133 acres of land.

At the site, team leader Mai Van Viet showed me the many precautions the team takes before a demolition. All visitors must sign in when they enter the site and provide the team medic with their contact information and blood type. An emergency response vehicle is on hand in case there are any problems. And all cell phones must be put in airplane mode in case the cell signal accidentally triggers one of the old bombs. 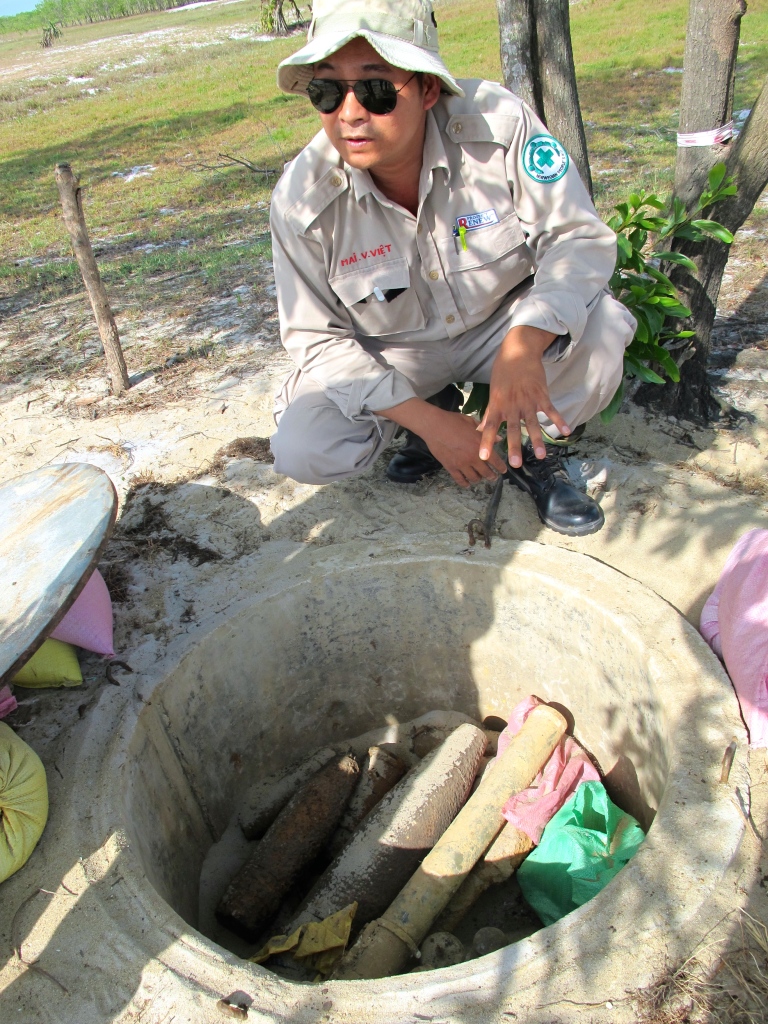 Viet shows me the dump where they store conventional UXO before they destroy it. (Photo by Nissa Rhee, June 2014)

All ordnance brought to the site is stored in a dump until they are ready to be destroyed. Conventional UXO are stored in a dry dump, while phosphorous bombs are stored underwater to prevent any accidental explosions.

Phosphorous bombs must be stored in a special water-filled dump to prevent them from exploding. (Photo by Nissa Rhee, June 2014).

Once the team is ready to destroy the UXO, they move the ordnance from the dump to the center of the demolition site. 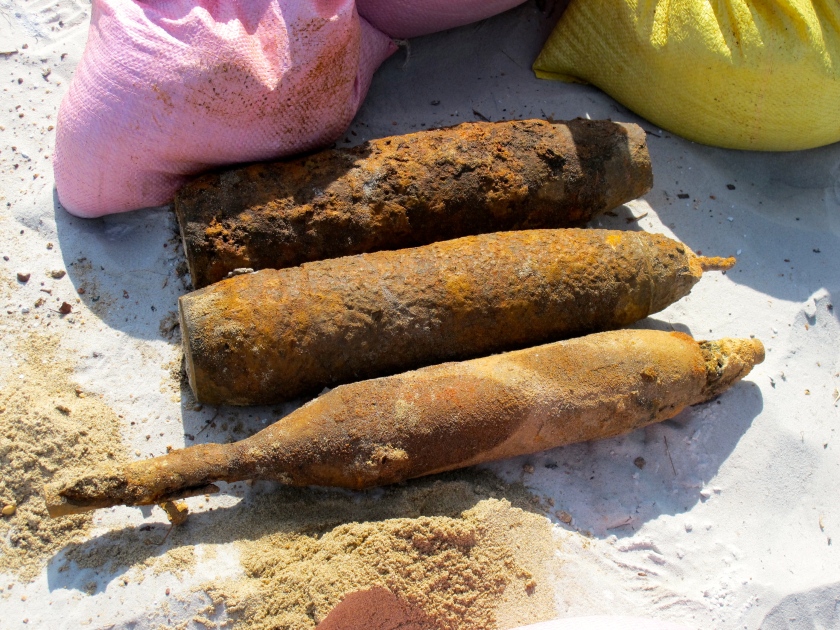 When an EOD team is ready to destroy ordnance, they move the bombs to a special sand-filled staging area. (Photo by Nissa Rhee, June 2014)

Multiple bombs are destroyed at once. On the day I visited, the team was detonating several naval artillery shells and white phosphorous bombs (like napalm) — all of which were launched by Americans during the war. 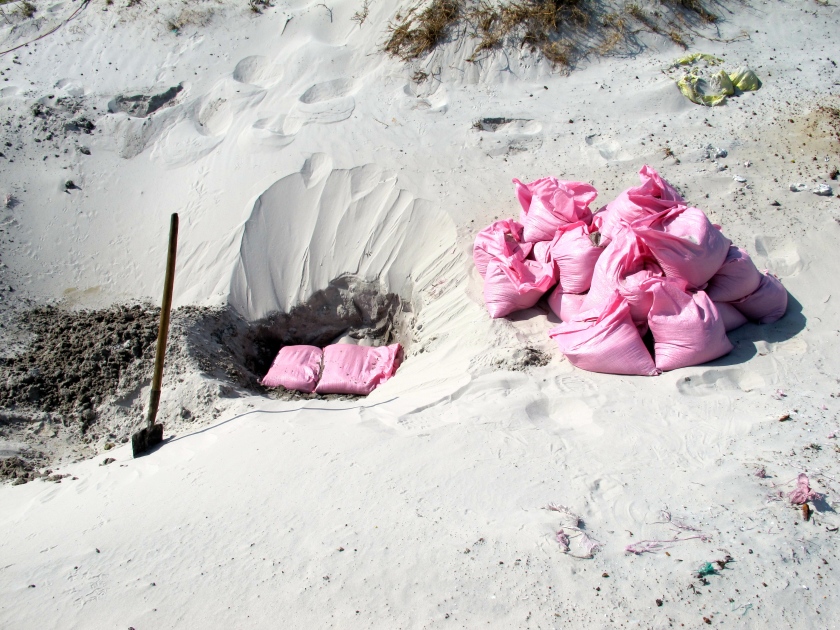 Sandbags are then placed on top of the UXO to prevent debris from flying when they are detonated. (Photo by Nissa Rhee, June 2014)

Sandbags are used to muffle the explosion and prevent debris from flying when the bombs are detonated.

Finally, the EOD team lays down the explosives that will destroy the ordnance. (Photo by Nissa Rhee, June 2014)

While I was there, the EOD team set up two detonations — one for conventional bombs and one for phosphorous bombs. The phosphorous bombs in particular require a lot of high explosives, since the teams must destroy both the bomb’s casing and booster.

Once the explosives have been laid, everyone moves to the set watch posts which are 500 meters away (1/3 mile) away from the planned demolitions.

The detonation of the phosphorous bombs releases a cloud of dust and fire. (Photo by Nissa Rhee, June 2014)

Even from such a distance, however, the demolitions are impressive. When the phosphorous bombs are detonated, they shoot clouds of fire into the sky.

The EOD team and I stand behind the crater that formed from one of the detonations. (Photo by Nguyen Thanh Phu, June 2014)

After the demolitions, we wait for the all clear before moving to the center of the site. In the distance, I can hear the booms of other explosions. RENEW’s Colonel Bui Trong Hong tells me that it’s the Vietnamese military practicing nearby at one of their bases. With the recent fracas between China and Vietnam in the South China Sea (or as the Vietnamese call it, the East Sea), the military is preparing for the possibility of an armed conflict.

“The Vietnamese are peace lovers, but we are always ready to fight,” Hong says with a grin.

When Saigon fell in 1975, Hong was one of thousands of people recruited to clear land mines and bombs from much-needed farmland. Their methods were primitive by today’s standards: often they would just stand in a line and use long bamboo poles to poke the land in front of them to find ordnance.

The difference between those early efforts at clearance and the work at Project RENEW is stark, with everything from the technology to the people involved changing.

“Today at Project Renew, we have North Vietnamese veterans working alongside the children of Viet Cong vets – like myself – and an American veteran,” RENEW’s Phu tells me. “All of us are working together.”

Do Thien Dang and I pose in his front yard. Do lost both of his legs when he stepped on a land mine in 1980. On the left is one of the bamboo stands he built for floral arrangements. (June 2014)

After the demolitions, I go with Phu and Hong to visit a UXO victim who was one of the first people to receive help from Project RENEW. Do Thien Dang lost both his legs when he stepped on a land mine in 1980 while gathering thatch in a field. Dang says that he was traumatized by the accident, which occurred when he was just 20 years old, and it took him a full three years to recover. He eventually got married and got a job selling lottery tickets on the street, but it was difficult work because he had to travel everyday.

Then, in 2003, RENEW gave him a “hanging house” to grow mushrooms on his property. The house has given him some financial independence and he can now work from home. RENEW has provided 194 families with hanging houses since they began their mushroom farming program.

Last year, Dang was able to bring in 5 million dong ($236) from his mushroom-growing business. In the dry season — when growing mushrooms is not possible — Dang builds bamboo stands for floral arrangements, which he sells at $1 a piece to local florists.

Do Thien Dang’s hanging house, where he grows mushrooms during the wet season. It was the dry season when I visited, so Dang was storing his bamboo stands there are the moment. (Photo by Nissa Rhee, June 2014)

When I ask Dang if he remembers meeting US veteran and RENEW cofounder Chuck Searcy, he smiles and nods.

“I really appreciate and am thankful for what Chuck as a vet has been doing here for our country and especially Quang Tri,” Dang says. “Chuck brings support for me and for others who are very much in need in Vietnam.”

One thought on “The DMZ: Part Two”