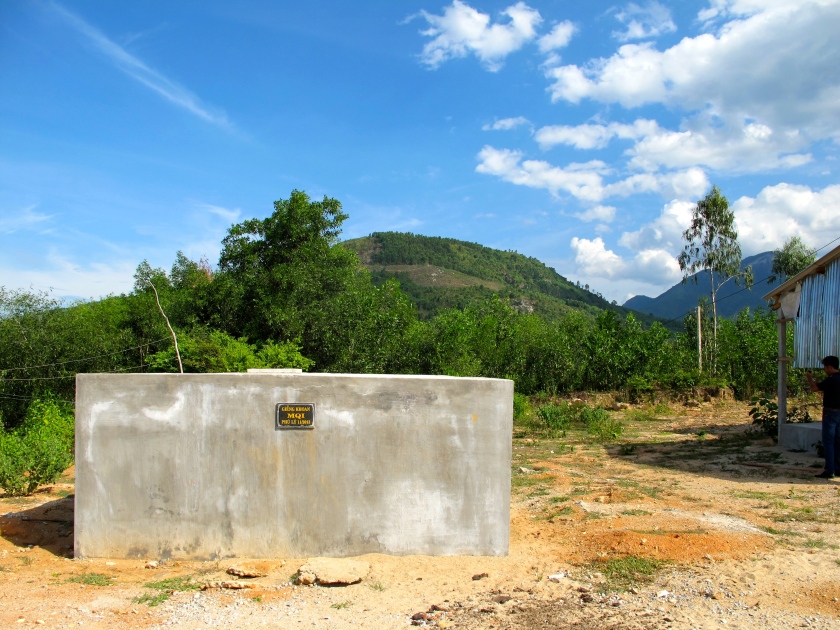 Nearly fifty years have passed since the My Lai massacre, but many Vietnamese in Quang Ngai Provence are still suspicious of or even hate Americans today. US Army veteran Mike Boehm‘s Madison Quakers, Inc organization is trying to overcome those negative feelings and build friendship and understanding between Americans and Vietnamese in Quang Ngai.

Mike started working in the provence 20 years ago when the Quang Ngai Women’s Union asked for his help in starting a micro-credit loan project. He partnered with English professor Phan Van Do and together they have developed a wide range of humanitarian programs in the provence. Mike estimates that MQI has raised and donated over $1.5 million to projects since the organization began.

When I visited Quang Ngai last month I got to see some of their work, including a series of water wells in Nghia Tho village. The people who live in the village are from the H’re ethnic minority and more than 69% of the population live in dire poverty. 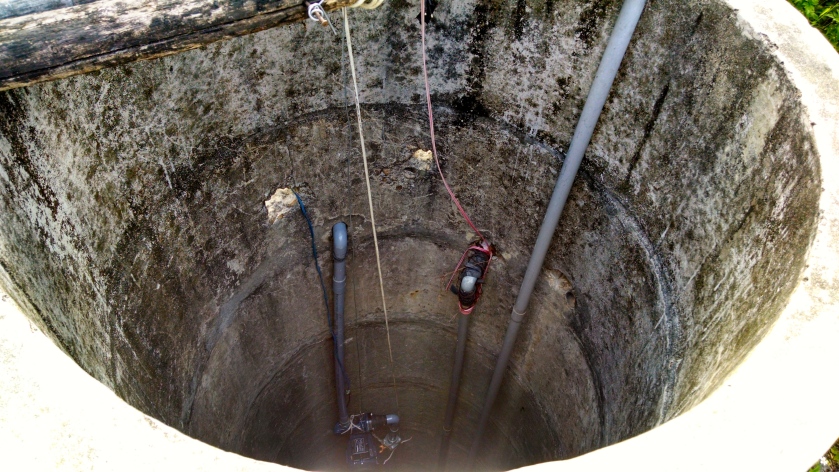 An MQI-funded well in Nghia Tho village in Quang Ngai Provence, Vietnam. The well provides water year around. (Photo by Nissa Rhee, June 2014)

Previous attempts by groups to build wells in the area failed because of the hard bedrock, which kept the wells empty during the dry season from May to August. 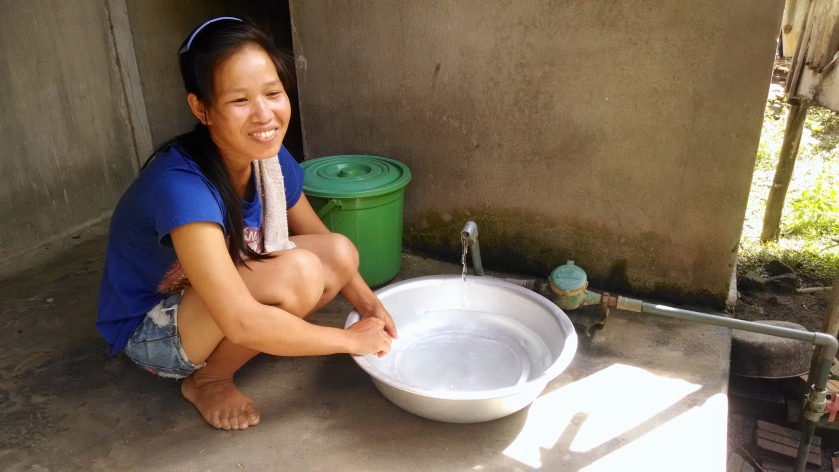 A woman living in Nghia Tho village in Quang Ngai Provence shows me the water that now flows to her house thanks to the well. (Photo by Nissa Rhee, June 2014)

Through hard work and persistence, MQI was able to overcome this problem by drilling through nearly 300 feet of granite to reach a constant flow of water. Do says that thanks to the wells, thousands of people now have ready access to clean water. 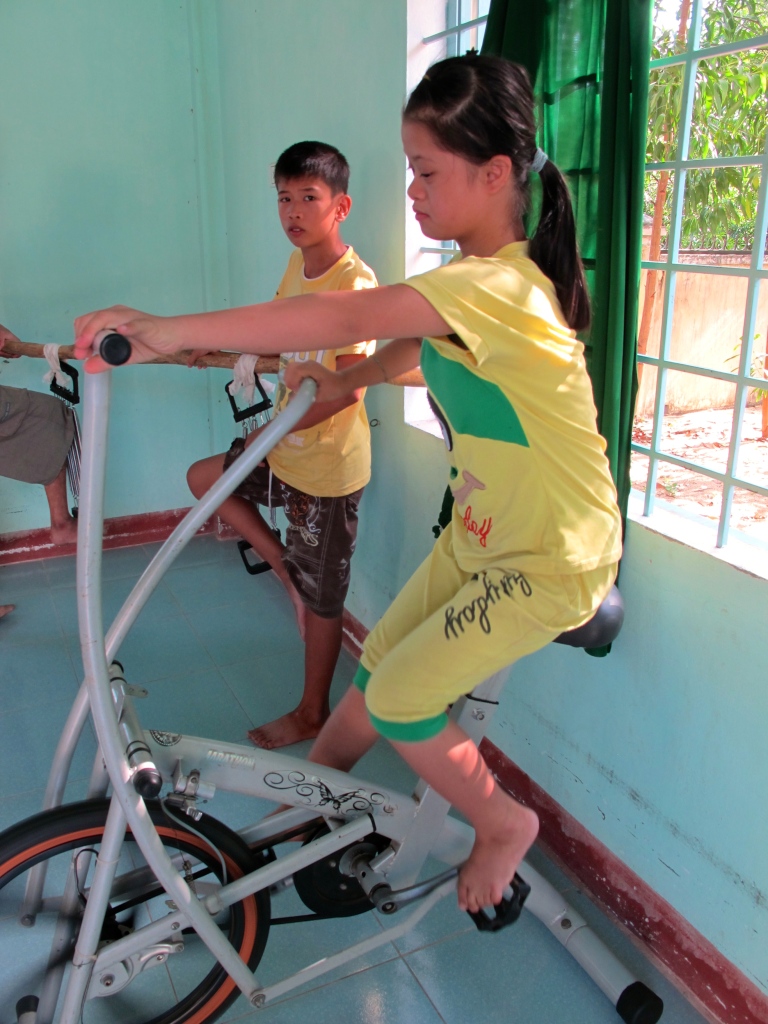 Children play at a school for victims of Agent Orange run by VAVA in Quang Ngai. (Photo by Nissa Rhee, June 2014)

The United States sprayed Agent Orange and other herbicides in Quang Ngai during the war, and these chemicals are continuing to affect the people living in the provence today. 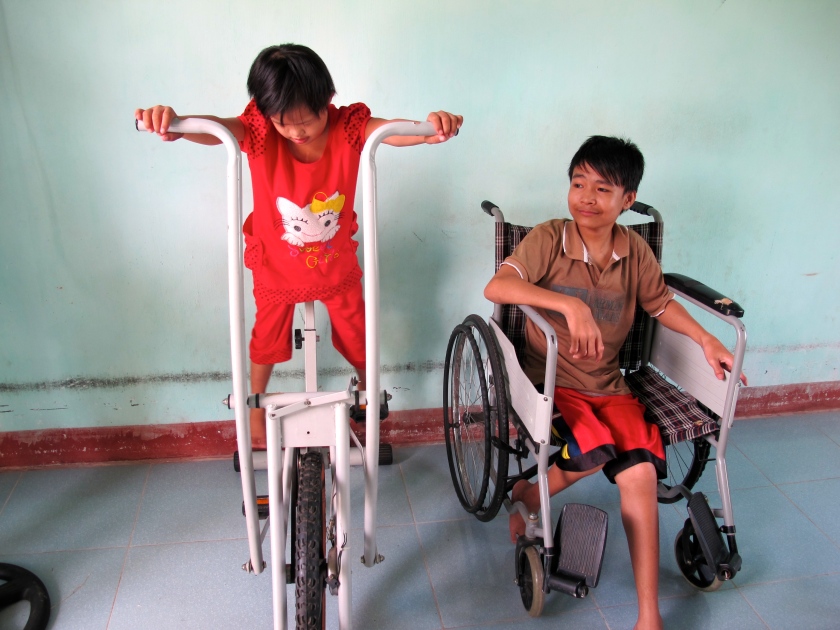 MQI is raising money for an outdoor playground for the children at the VAVA school in Quang Ngai. (Photo by NIssa Rhee, June 2014)

I visited a school run by the local branch of the Vietnam Association of Victims of Agent Orange (VAVA), which MQI has donated to in the past. The school currently has an indoor playground with physical therapy machines, but MQI is trying to raise money to build them an outdoor play area as well. 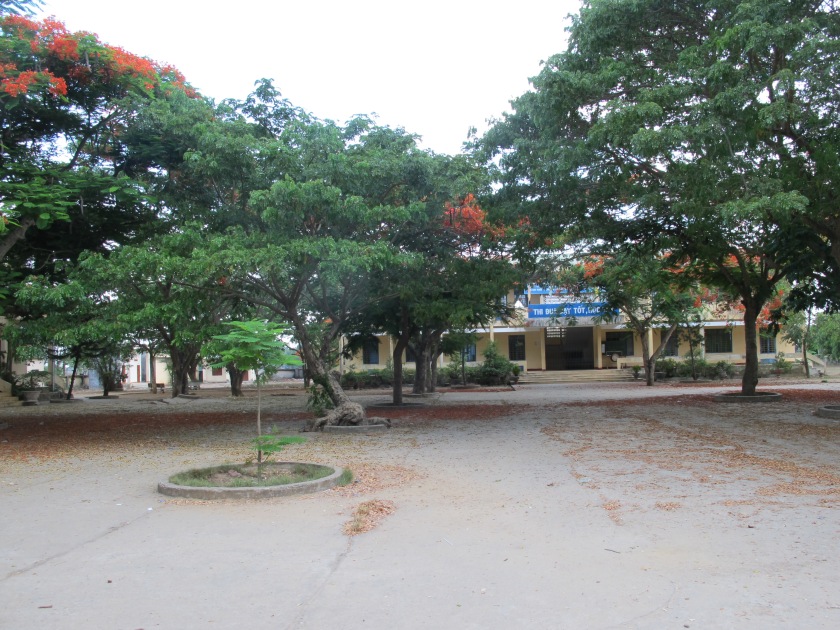 A Vietnamese proverb states: “For a profit in ten years, invest in trees. For a profit on a hundred years, invest in children.” MQI took this to heart when they built the My Lai Grammar School. When MQI first visited the site where the school now stands, it was just an empty field with a few houses. Now, it it home to the most popular primary school in the area. It has three buildings with a total of 16 classrooms. US Army veteran Hugh Thompson — who helped stop the My Lai massacre — donated money so the school could have indoor bathrooms. 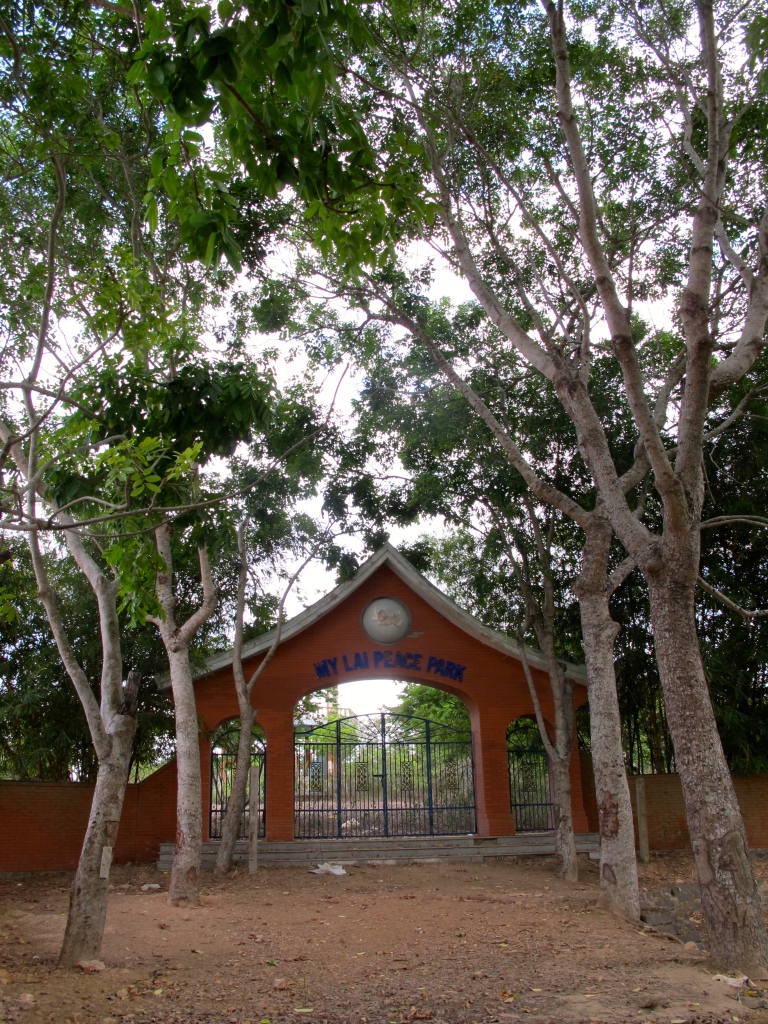 The entrance to the My Lai Peace Park in Quang Ngai, with trees planted by US veterans and survivors of the My Lai massacre. (Photo by Nissa Rhee, June 2014)

While there are many war memorials in Vietnam, until recently there have been no places dedicated to peace and healing. MQI worked with the Vietnamese government to build the My Lai Peace Park so that people had a place “to visit and remember the past and hope for the future.” 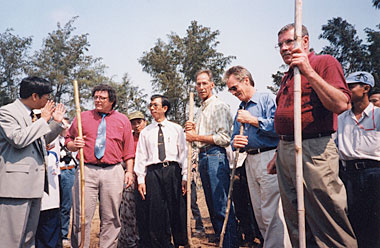 Mike Boehm (2nd from left) with veterans Hugh Thompson and Larry Colburn at the groundbreaking ceremony for the peace park. (Photo courtesy of MQI)

Hugh Thompson along with Larry Colburn — a member of Thompson’s helicopter crew who intervened in the My Lai massacre and helped save civilians — attended the groundbreaking ceremony for the peace park. Along with some of the Vietnamese survivors of the massacre, the veterans planted the trees that line the road to the peace park. 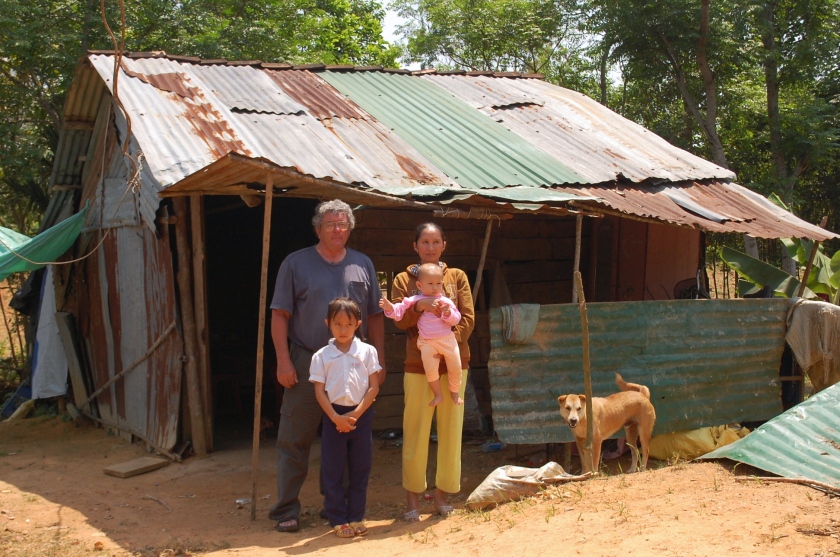 Mike Boehm with a family in Tinh Giang commune, Quang Ngai. MQI is working on getting this family a compassion house. (Photo courtesy of Phan Van Do)

One of MQI’s biggest projects has been building “compassion houses” for very poor families in Quang Ngai. These simple cement houses often replace ramshackle structures, which would fall apart during typhoon season. 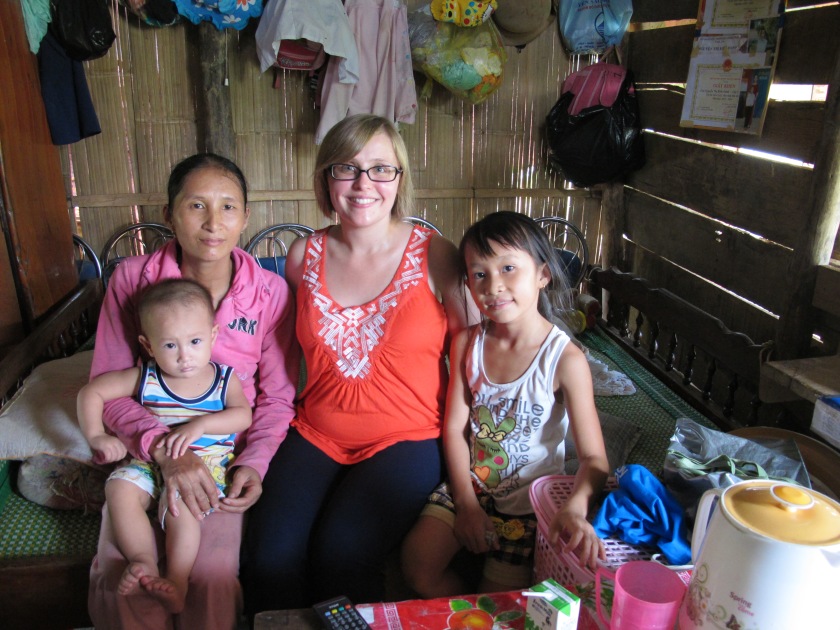 I sit with the same family in their home in Tinh Giang commune, Quang Ngai. (Photo by Nissa Rhee, June 2014)

I visited one family who is in need of a compassion house in Tinh Giang commune. The head of the family is a single mother and she told me that she’s worried that her house might collapse and hurt her two children. MQI is now working with her and they hope to build her a new, safer house soon. 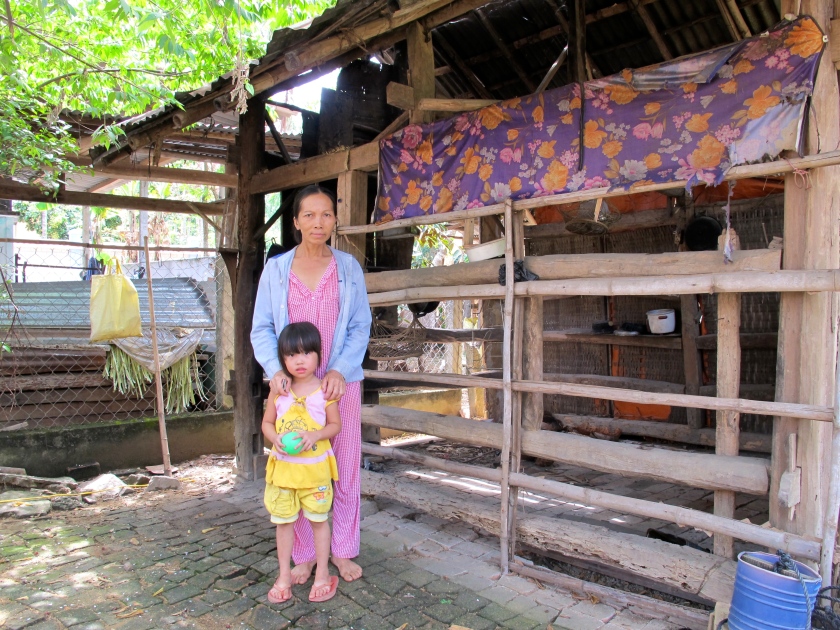 A family shows me their old house in Quang Ngai. (Photo by Nissa Rhee, June 2014)

The difference between an old house and a new compassion house is stark. 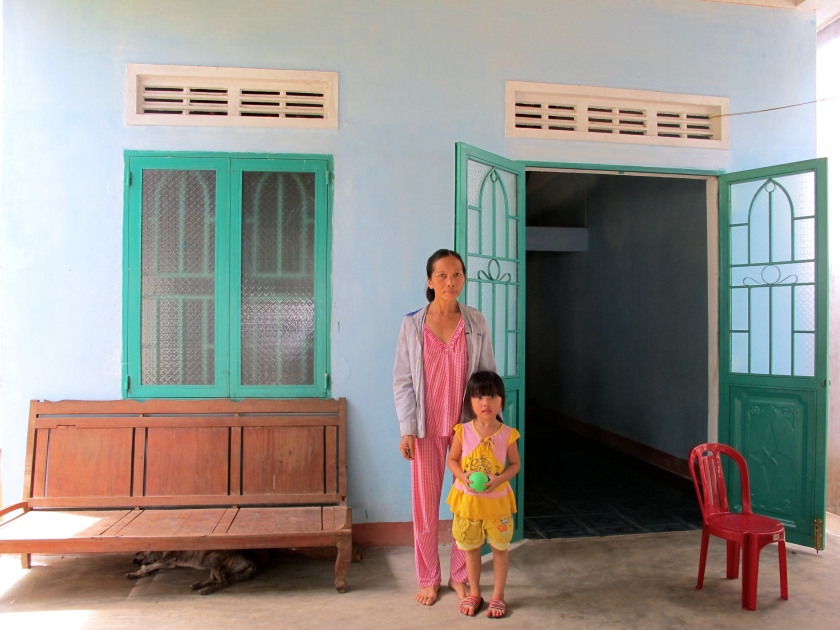 The same family with their new house in Quang Ngai. (Photo by Nissa Rhee, June 2014) 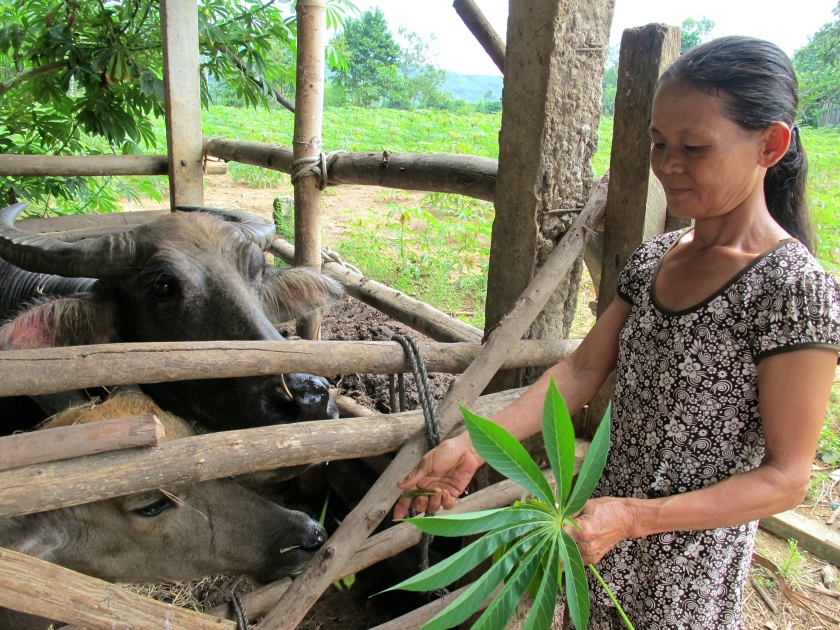 A woman feeds her water buffalos, which she was able to purchase through a micro-credit loan from MQI. (Photo by Nissa Rhee, June 2014)

MQI still works closely with the Quang Ngai Women’s Union, who help Mike and Do identify families in need. I visited one family identified by the Women’s Union that was able to purchase a female water buffalo through a micro-credit loan from MQI. The buffalo has given birth to a calf and is pregnant once again. The family told me that if they sold the buffalos today, they could get $1,500 for the mother and $700 or $800 for the calf. The is a substantial amount of money for the family and will make a major difference in their lives.

If you’re interested in learning more about Mike and Do’s work in Quang Ngai, please visit their website. There, you’ll be able to watch the award-winning documentary The Sound of the Violin in My Lai, which features Mike, and learn how to donate to their projects.