When I was in Hanoi this summer, I visited Friendship Village, a community founded by an American veteran in the early years after the war as a symbol of peace and reconciliation. Thanks to the continuing support of American veterans and their families, the village has since grown into a large residential school and medical center that serves 70 Vietnamese veterans and 120 children affected by Agent Orange.

The village is run by Director Dang Vu Dung, a North Vietnamese Army veteran of the US-Vietnam War. He served in Quang Tri Province starting in 1972 and was tasked with ensuring that the North Vietnamese troops had enough food. After retiring from the military, Dung came to Friendship Village and met American veterans for the first time.

When I asked Dung if he had any negative feelings toward the American people after the war, he said no.

“During the war, I knew that there were people in the US protesting the war in Vietnam. The US veterans were very young and forced to come to Vietnam by the American government. But they didn’t understand much about Vietnam.”

One of those Americans protesting the war was George Mizo, the American veteran who first conceived of Friendship Village in 1988. George volunteered for the Army at age 17 and became the youngest sergeant in the US military by the time he was 19. He eventually made his way to Vietnam, where he was wounded three times. George became disillusioned with the military’s mission in Vietnam and the Army’s treatment of Vietnamese civilians. After recovering from his battle injuries, George refused to return to Vietnam and was court-martialed. He spent the next two years in a military prison.

But George’s experience in Vietnam was far from over. Thirteen years after the fall of Saigon, he made his way back to Vietnam, determined to make a positive difference there. He said of the trip: “The horrible experiences during the war and the suffering of everybody on all sides inspired me to do something that would be a living symbol of peace, reconciliation and hope.”

After extensive discussions with Vietnamese veterans along with peace activists from France, Germany, Japan and the United States, George’s “living symbol” — Friendship Village — finally opened in 1998.

Students can learn a number of computer programs at Friendship Village, including Photoshop and Microsoft Excel and Word. (Photo by Nissa Rhee, June 2014) 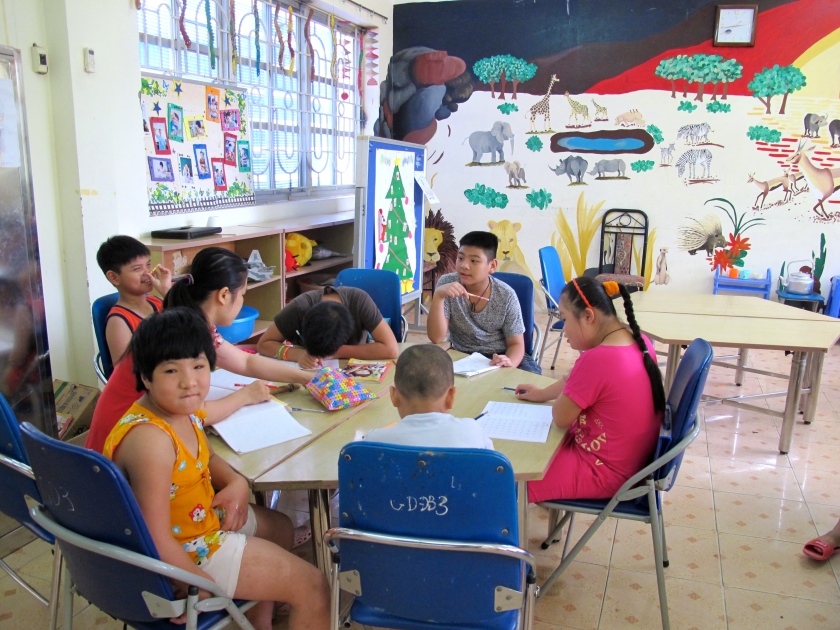 Students practice their writing and arithmetic in a Friendship Village classroom. American volunteers have painted murals in the classrooms and dorms. (Photo by Nissa Rhee, June 2014). 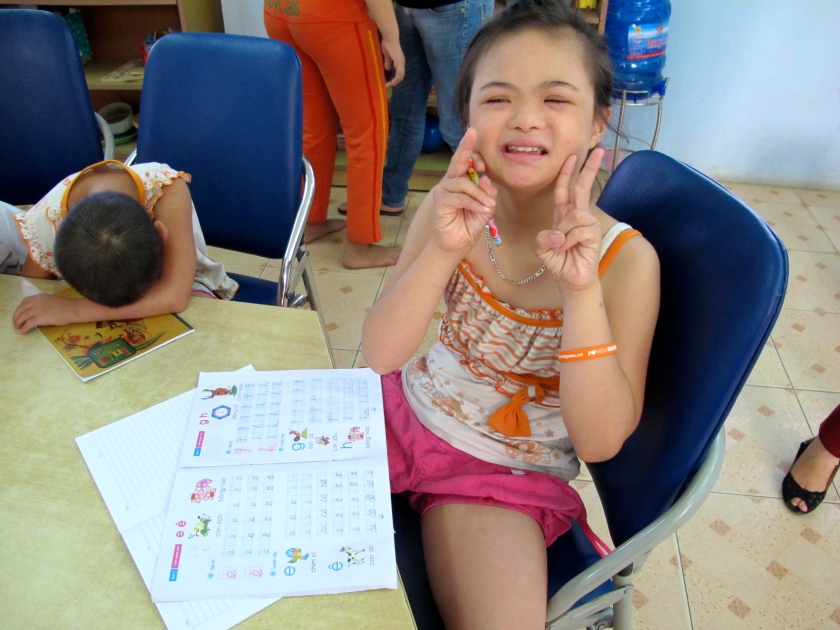 A Friendship Village student takes a break from her cursive lesson to pose for the camera. (Photo by Nissa Rhee, June 2014)

Sixteen years on, the students and veterans at Friendship Village are thriving. Three students have gone on to college after graduating from the school. Despite the challenges the students face in getting admitted, one student I met told me that he hopes to go to university and become a writer someday. Others will use their new skills to find jobs as hair stylists and artisans in their communities back home.

A student practices embroidery in a classroom at Friendship Village. (Photo by Nissa Rhee, June 2014)

In Friendship Village’s newest venture, students learn how to wash and style hair. The hope is that such training will allow the students to find jobs in beauty salons. (Photo by Nissa Rhee, June 2014).

While George passed away in 2002 from an illness linked to his wartime exposure to Agent Orange, American veterans and their families continue to be involved in the village today. Veterans like Don Blackburn are members of the village’s international board and spend time raising money for the Vietnamese students and veterans who rely on the village for support. Additionally, the village hosts a large roster of international volunteers and interns who do everything from paint murals in the classrooms to teach the students math and photography.

When I met up with Don last summer, he read for me a poem he wrote after visiting Friendship Village for the first time in 2005. “In this village, humanity makes a stand,” the poem goes. “Here, in the eyes of the stricken who survive, / in the hearts of those who work and give, / I see a reason to hope, dream, and live.” 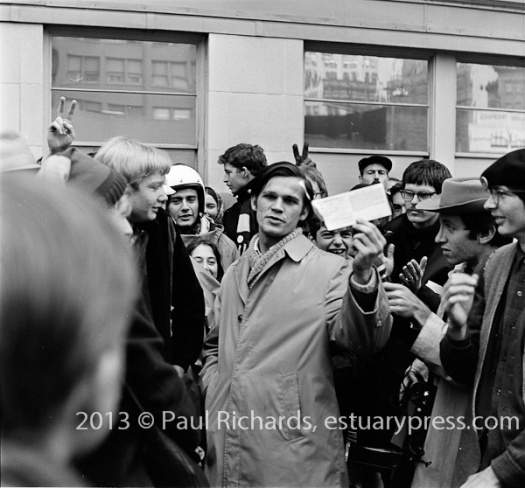 Draft cards burning in front of the door to the Oakland Army Induction Center in December 1967. (From the Harvey Richards Media Archive)

Forty-six years ago this week, a coalition of 40 anti-war organizations staged “Stop the Draft Week” demonstrations. Protesters burnt their draft cards — an act which Congress had made illegal two years before — and rallied outside of military centers. The week was just the latest in what had turned out to be a year of anti-war actions. In April, the National Mobilization Committee to End the War in Vietnam led 400,000 protesters on a march from New York’s Central Park to the UN headquarters. Well-known peace activists like Dr Martin Luther King Jr and Dr Benjamin Spock addressed the crowd, along with Vietnam veteran Jan Berry Crumb.

Crumb had served in Vietnam in 1963 as part of a group of military “advisors” the US had sent to Southeast Asia to train the South Vietnamese Army. What he saw in Vietnam disturbed him and not long after returning to the US, he resigned from the military. In June 1967, Crumb and five other veterans joined together and founded the organization Vietnam Veterans Against the War. The organization would become a critical voice for anti-war veterans in the years to come. As Gerald Nicosia writes in “Home to War: A History of the Vietnam Veteran’s Movement”:

The organization would put Richard Nixon into a panic, provoke FBI Director J. Edgar Hoover into breaking the law in order to destroy it, precipitate the last major conspiracy trial of the era, and bring to prominence at least one leader of national stature, John Kerry.

A February 1971 ad for VVAW, which explained their reasons for protesting the war. This ad was funded by Hugh Hefner and ran in Playboy magazine.

The Vietnam veterans who protested the war in the 60s and 70s blazed a trail for modern anti-war veterans. But American veterans of the wars in Iraq and Afghanistan today protest without the support of a large anti-war movement. They are more easily silenced because fewer people are paying attention. Afghanistan vet Joe Glenton wrote a piece in Vice magazine last week highlighting some of the American and British veterans who are speaking out against war. It’s a must-read for anyone interested in peace activism.