A young protester at the march on Saturday. (Photo by Nissa Rhee).

For my latest article for The Christian Science Monitor, I went to a Black Lives Matter rally and march on Saturday and then a giant conference of police chiefs on Monday. You can read about the competing events here.

My story on Chicago’s crime spike was published today in The Christian Science Monitor. You can read it here. 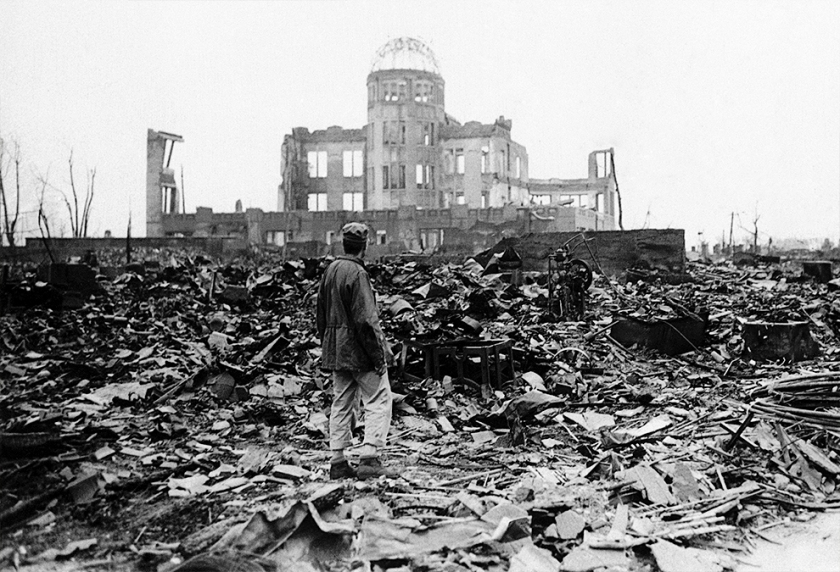 Yesterday was the 70th anniversary of the atomic bombing of Hiroshima. In this week’s remembrances, I’ve heard again and again the argument that the bomb ended the war and that it saved countless American lives by avoiding the need for a ground invasion. This myth persists, despite being largely disproven. (See The Decision to use the Bomb by Gar Alperovitz).

The “bomb won the war” narrative is dangerous, because it ignores the countless victims whose lives were ended or forever changed by the bombs in favor of the American victors. This piece by Sofai Ahlberg is a good reminder on why we need to hear the stories of survivors and continue to explore the atomic bomb’s consequences seven decades on. Let us remember that the devastation created at Hiroshima and Nagasaki in 1945 was manmade, and it could easily happen again. 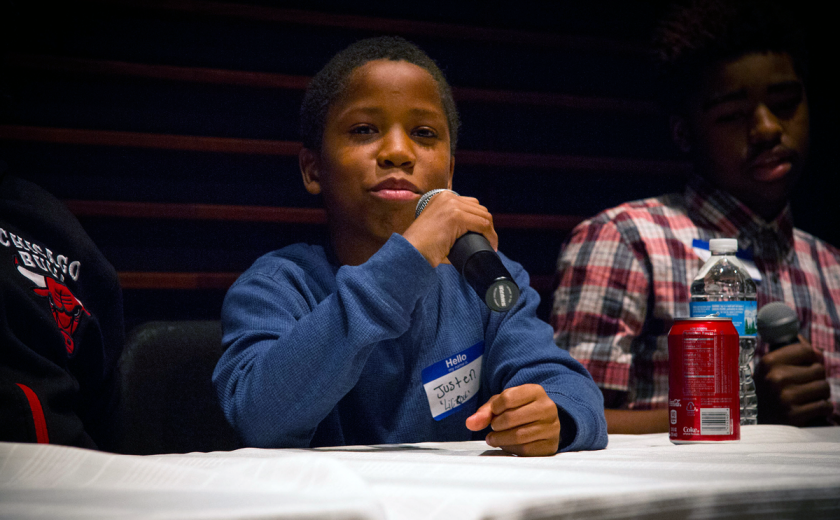 At Story Squad programs, students from the South Side share their experiences. (Photo courtesy Youth Safety and Violence Prevention program)

My latest article in The University of Chicago Magazine is out. It’s a profile of Ryan Lugalia-Hollon and Eddie Bocanegra, the heads of the Chicago YMCA’s Youth Safety and Violence Prevention Program. They’re doing some incredible work with young people on the South and West sides, including getting war veterans to mentor kids involved with gangs. You can read the article here.

Me and Dung Nguyen outside of the radio station in Chicago.

I was on Chicago Public Radio’s Worldview program yesterday for the 40th anniversary of the fall of Saigon. You can hear the interview here. I was joined on air by Dung Nguyen — a South Vietnamese veteran and refugee living in Chicago — and John Riordan — the “Oscar Shindler of the Vietnam War.”

I was interviewed by the San Diego Union-Tribune recently for an article about an American veteran who reconnected with his wartime friend when he returned to Vietnam. You can read the article here.

General Mike Neil was just 26 years old when he went to Vietnam as a Marine in 1967, but he became a father figure to the 12-year-old Vietnamese boy he nicknamed “GTO.” After Gen. Neil’s tour was up, he left Vietnam and for years wondered what had happened to his young friend. Finally, in 2009 he returned to Vietnam on a battlefield tour and was able to track down GTO. The two have kept in touch since then and GTO recently visited the United States to see Gen. Neil.

But Neil’s return to Vietnam and his reunion with GTO is about more than a decades-long friendship. As one U-T San Diego reader put it, it was about finding peace after struggling for years with a difficult war. 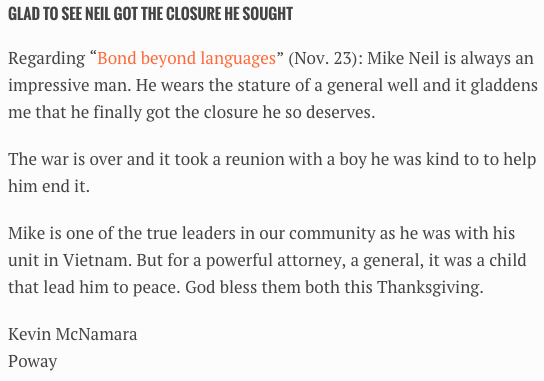 In this blog and the book I’m working on I look at how veterans from both sides of the war in Vietnam have come together to work for peace. These Americans and Vietnamese who once tried to kill each other are now working hard to address the legacies of the war, like unexploded bombs, Agent Orange, and PTSD. Their transformation from soldiers to peacebuilders is a glimmer of hope in this world where war often looks more like the norm rather than the exception.

One of these groups is Combatants for Peace, which brings together former soldiers and combatants from both sides to encourage reconciliation and understanding. You can learn about their programs in the video above. In recent days, they’ve been holding demonstrations against the violence and talking to the press about how the conflict hurts both Israelis and Palestinians. As with Vietnam, the vets in Israel/Palestine are proving that former combatants can play an important role in ending cycles of violence.

What does America’s relationship with Vietnam look like nearly 40 years after the fall of Saigon? The answer, it turns out, varies widely depending if you’re part of the government or a private citizen.

As Washington grows closer to Hanoi through increased trade and military alliances, many Americans are cautious about the alliance. This gap in perspectives became clear this week as the United States began naval exercises with Vietnam.

This is the fifth time the navies have engaged in joint exercises. According to Bloomberg, this week’s engagements “will focus on military medicine, search and rescue and shipboard damage control, with participation by the missile destroyer USS John S. McCain.” The US Navy reported that the exercise “builds mutual trust and understanding.”

That trust and understanding was not felt in a town hall meeting in California this week, however. Six hundred people showed up to protest a proposal for naming Nha Trang, Vietnam as a “friendship city” with Irvine, California. The loudest opponents were Vietnamese-Americans, who, according to the LA Times, criticized Vietnam’s human rights abuses and lack of democracy.

This week’s events show that four decades after the end of the war, there are still many challenges to friendship and reconciliation between Vietnam and the United States.